Items you love sold out?
Don't worry! Message us to reserve yours!
SHOP NOW

Everything You Need To Know About Teething

Kelly Langford, mother of a teething baby and MAMA Midwife, shares her tips and advice on teething. 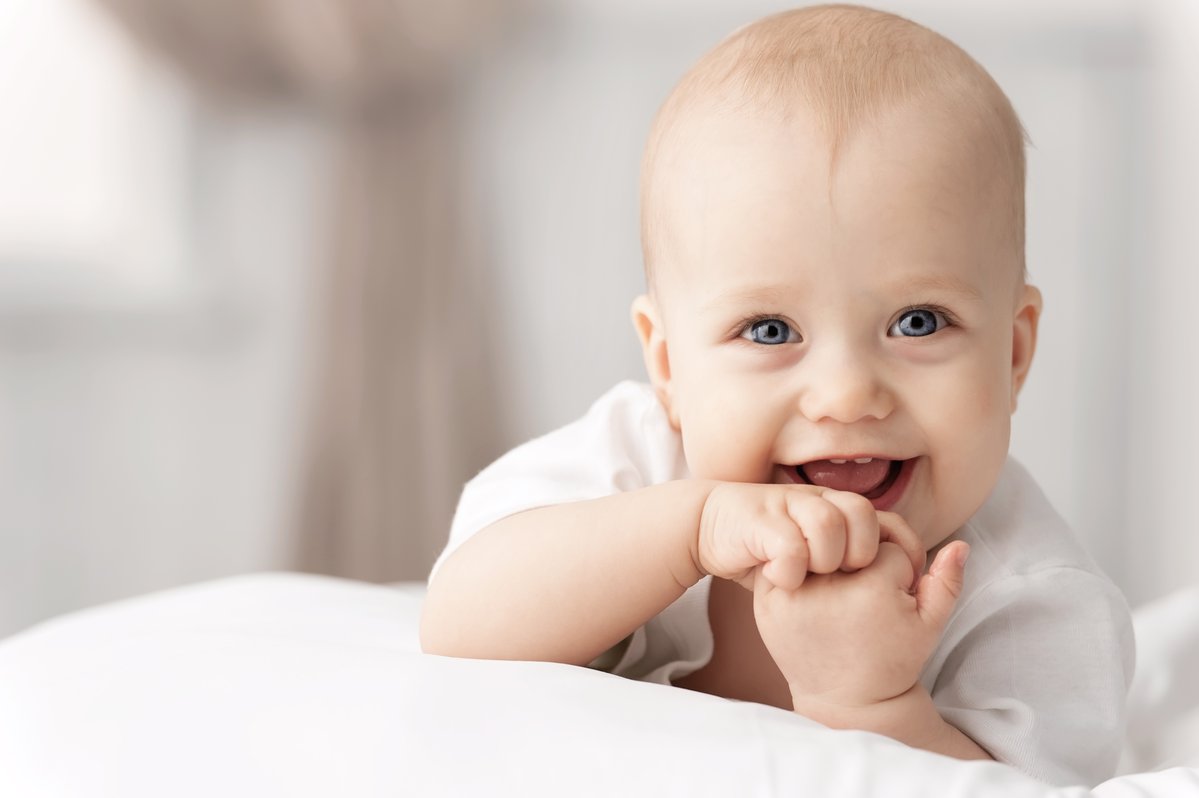 For some children there is barely a night of disturbed sleep and for others, the treachery of teeth erupting (yes, that’s the technical name for teeth coming through) makes for a tired household for the first couple of years.

So why is there such a variation? And for those little ones that seem to be really affected by teething, how can we help them (and in turn help ourselves)?

Firstly, let's talk about when they usually appear.

There are 20 teeth hidden in your little ones gums and the first of these will usually make an appearance between 4-8 months. Generally speaking, it’s the bottom two front teeth that appear first, followed by the upper four front teeth. Then from one-year on, the molars and canines will begin to emerge.

Teeth are not a developmental milestone, so don’t worry if your baby is a ‘late teether’. The literature suggests that you should seek a medical opinion if your little one is13 months old and there’s no sign of a first tooth.

Why Do Some Babies Struggle More Than Others?
What we have to remember is that babies are individuals. Some babies experience teeth moving up and down just under the gums for a number of months, whereas for others, they erupt within days. Hereditary factors play a role as well. So, if you or your partner were early or late teethers, your baby might be as well.

How Do You Know Your Baby Is Teething?
Your little one may have one or more of the following symptoms:
- Irritability
- Nappy rash
- Drooling
- Grabbing ears
- Flushed cheeks
- Red, swollen gums
- Fussiness with feeding/eating
- Unsettled/disrupted sleep
- Biting

Teething can be mistaken for normal growth and development, as babies often show many of these signs during growth spurts. So don’t worry; you won't lose any points if you think your baby is teething when they’re not. In fact, I thought my son’s first teeth were coming through at 12 weeks; they appeared at 12 months.

What You Can Do To Relieve The Pain
Below are some ideas you can try to help relieve the pain associated with teething:

- Lots of hugs. We know from many studies of labour that when oxytocin (the hormone of love) is boosted, endorphins (natural pain relief) are also enhanced. So a hug can actually help relieve your little ones pain.

- Breast milk has been shown to contain natural painkillers, so your baby may naturally want more when they’re teething.

- Cold items can be used to help soothe the gum and reduce inflammation. Ideas you can try include placing a wet face washer in the freezer, which your baby can then chew on; cold food such as cucumber or capsicum (watch for choking hazards), pureed fruit or yoghurt; and cold water if they’re over 6 months old.

- Give your little one something to chew. Teething rusks are made for this. You can also apply gentle pressure and rub your clean finger along your little one’s gums.

- Pain relief. Seek advice from your pharmacist before using these products but they can prove very helpful in reducing your baby’s pain. Paracetamol relieves pain for up to 6 hours and can be used after 3 months of age, while ibuprofen relieves pain for up to 8 hours and helps reduce inflammation. In addition, teething gels can prove helpful. Whatever you choose, it’s always important to follow the directions on the packaging.

Whatever you choose, it’s important to hang in there and remember we all got through teething one way or another. But if times feel tough, feel free to blame it on teething, it can make you feel so much better! For more information visit https://www.betterhealth.vic.gov.au

Some Additional Advice From MAMA
- Make your own teething rusks! There are some great recipes online that avoid all the nasties that can be found in packaged rusks.

- If you’re breastfeeding, don’t yell when your baby bites down on your breast. They may like the reaction and bite the breast to get it again.

- It is not advised to rub the gum with any sort of alcohol.

- Allow your baby to watch you brush your teeth and give them a toothbrush to play with. Eventually they will copy you and brush their own.

- Act as a role model for your baby and allow them to watch you cleaning your teeth. This way when the time comes, they are familiar with the activity.

- Don’t use adult toothpaste to brush their teeth.

- Seek support from a dentist if you have any questions or concerns.

Use our handy teething guide to discover what order your baby's teeth are likely to emerge, when it may happen, and when they’ll fall out. 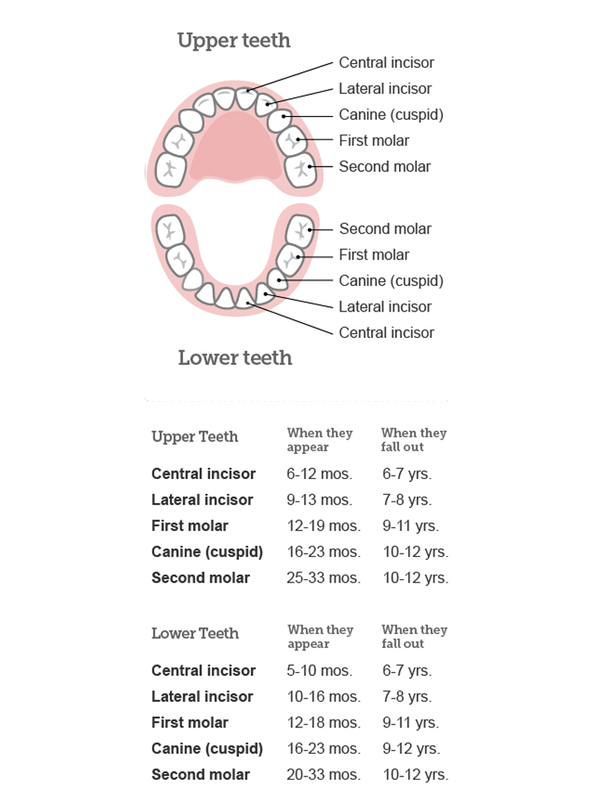 When will your baby's teeth come in and fall out?

Even before your baby was born, tooth buds were developing under her gums. This chart gives you an idea of when pearly whites typically start to appear and when baby teeth begin falling out to make way for permanent ones.

Keep in mind that this is a general timeline. It's perfectly normal for your baby's first tooth to show up at three months – or after her first birthday. Some babies are even born with teeth! It's also fine if your child's teeth come in or fall out in a different order than what's outlined here. 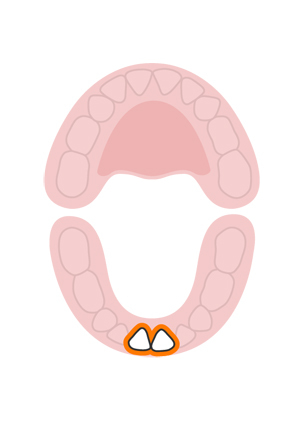 The bottom middle teeth typically emerge first, between five and 10 months. Tooth development is hereditary, so if you got your teeth early, chances are your baby will, too! 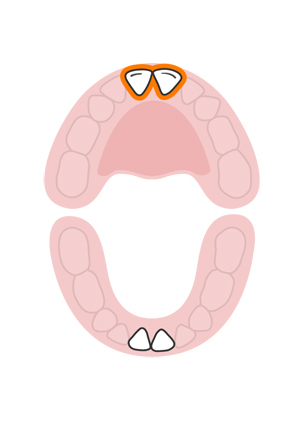 The upper middle teeth come next, between six and 12 months. Teeth usually emerge in pairs.

The upper central incisors fall out between six and seven years. 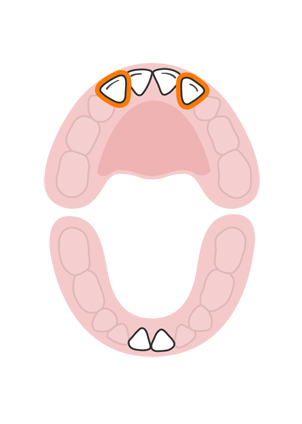 Between nine and 13 months, you'll probably see the upper teeth to the right and left of centre. This will give your baby a row of four teeth across the top.

The lower teeth to the right and left of centre usually make their debut between 10 and 16 months. Now your baby can flash you an adorable toothy smile!

She’s likely to lose both her lower and upper lateral incisors when she’s between six and seven years old. 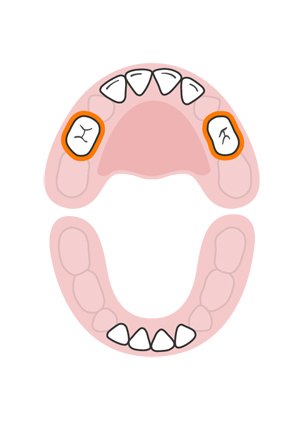 Your child's first molars, the bigger teeth towards the back of the mouth, tend to emerge between 12 and 19 months. 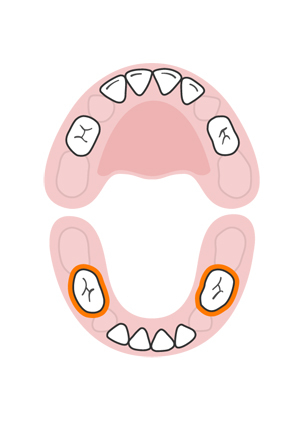 The lower first molars usually emerge at the bottom between 12 and 18 months.

The upper and lower molars typically fall out between nine and 11 years. 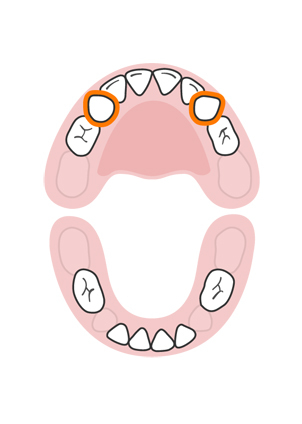 The upper canines fill the gap between the incisors and first molars between 16 and 23 months.

These two teeth usually fall out between 10 and 12 years. 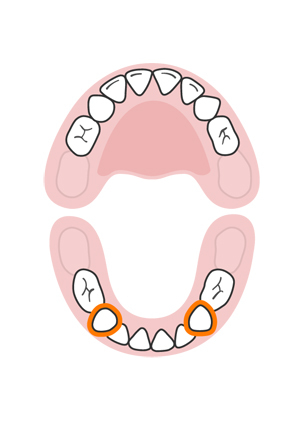 The lower canines usually make their appearance between 16 and 23 months. Your child's smile is probably the brightest it'll ever be, since baby teeth are whiter than permanent teeth.

She’ll lose her lower canines when she’s between nine and 12 years old. 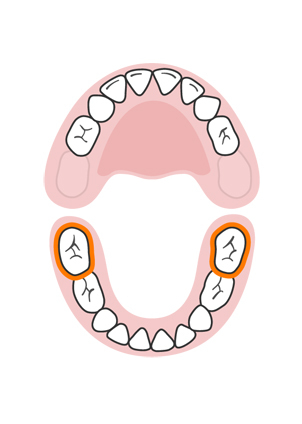 The rear molars usually poke through on the bottom first, between 20 and 33 months. 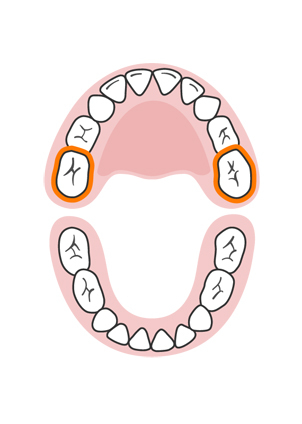 Between 25 and 33 months, your baby's final teeth, the rear molars on the top, emerge. By the age of three, most children have a full set of 20 baby teeth and can give you a brilliant grin.

The second molars are some of the last baby teeth your child will lose, usually when she's between 10 and 12 years old. 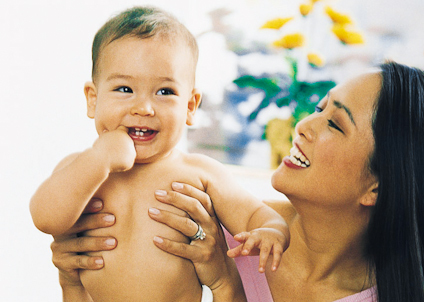